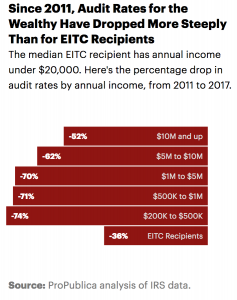 A December article from ProPublica takes a closer look at IRS audit rates by income. While higher-income taxpayers are still more likely to be audited, under pressure from Congress, the IRS has kept the audit rate of EITC recipients relatively high due to concerns about overpayment. The consistent budget cuts at the IRS, reports ProPublica, have decreased audit rates overall, but audits of EITC recipients have dropped the least:
“What happens is you have people at the very top being prioritized and people at the very bottom being prioritized, and everyone else is sort of squeezed out,” said John Dalrymple, who retired last year as deputy commissioner of the IRS. In 2017, EITC recipients were audited at twice the rate of taxpayers with income between $200,000 and $500,000. Only households with income above $1 million were examined at significantly higher rates.
Access the full article: Who’s More Likely to Be Audited? A Person Making $20,000 — or $400,000? (ProPublica, December 2018)
Tell Us What You Would Like the Network to Focus on!
Go to Top