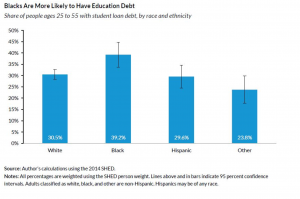 Research indicates that some EITC recipients use their refunds to help pay off debt – including student debt. Average student loan debt at graduation has been growing over the last two decades, but often this burden impacts some families more than others. A recent Urban Institute analysis of 2014 Household Economics and Decisionmaking (SHED) data takes a closer look at the racial and ethnic differences in loans that finance a family member’s education expenses. The data confirms previous reports showing that black students are significantly more likely to have student loan debt than their white or Hispanic counterparts. However, the data also shows that the differences in rates for borrowing for a child or grandchild’s education are statistically insignificant. The authors of the report, “Racial and Ethnic Differences in Family Student Loan Debt,” provide two possible explanations for this finding. First, racial disparities in wealth may constrain black families from using wealth as collateral in parental loan programs. Second, black students are more likely than other demographic groups to enroll in college later in life, when parents and grandparents may have less of a role in financing education.
Tell Us What You Would Like the Network to Focus on!
Go to Top