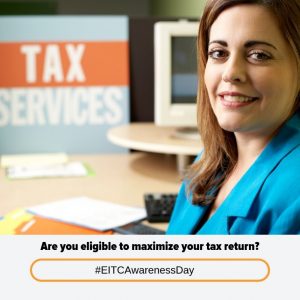 Each year, the IRS and national partners join in a coordinated outreach effort to increase tax credit eligibility awareness. The 13th annual EITC Awareness Day is on Friday, January 25th, 2019.

The IRS estimates that 1 in 5 eligible taxpayers does not claim the EITC. EITC Awareness Day helps shine a spotlight on refundable credits to increase awareness among taxpayers who may be eligible. Resources to help you and your grantees reach eligible taxpayers are available:

Tax Credits for Working Families also shares their list of the “Top Ten Reasons Why We Love the EITC.”

Finally, take a look at the guest post we wrote on Why We Should Expand the Earned Income Tax Credit on our field partner Prosperity Now’s website (cross-posted below).

Today is EITC Awareness Day, when we promote the importance of the Earned Income Tax Credit (EITC) and ensure that every eligible worker has access to one of the largest and most effective poverty-reduction programs in the nation. Reaching out to EITC-eligible populations is critical work. While 25 million low- and moderate-income taxpayers claimed the EITC last year, one in five who are eligible for the credit—with an even higher proportion in some areas—are missing out on a valuable benefit, worth an average of almost $2500 per recipient.

EITC outreach and access to free tax preparation have long been the bread and butter of charitable foundations working to alleviate poverty. Charitable foundations—working together with field partners—understand the importance of EITC outreach in the transformative work that helps workers and their families secure greater economic security and stability. The EITC lifted close to six million people out of poverty in 2016, and research has shown that receiving the tax credit is associated with improved health, education and employment effects into the next generation.

Echoing momentum in the field, funders are also asking important questions about extending the proven benefits of the EITC by expanding and improving federal and state policy. While the federal EITC has made a tremendous difference in keeping and moving low-wage workers with children out of poverty, those without dependent children (some of whom are noncustodial parents) have been left out of the tax credit. Due in large part to the exclusion from EITC eligibility, working adults without dependent children represent the only demographic group that the federal tax system taxes into poverty.

Although federal proposals to expand the EITC have surfaced, states are leading the way. Washington, DC expanded its EITC to benefit workers without dependent children in 2014, followed by Minnesota in 2017, which expanded its credit so that young workers without dependent children could qualify at age 21. In the 2018 state legislative sessions, California expanded its state EITC eligibility to single filers between the ages of 18 and 24 and those over 65, and Maryland took out the minimum age requirement for its state EITC.

Research demonstrates the promise of these expansions. MDRC’s Paycheck Plus program, which simulated expanding the maximum EITC for childless workers in New York City and Atlanta over a three-year period, showed increased work rates, after-credit income (making low-wage work pay) and a reduction in severe poverty. A focus group conducted by Tax Credits for Workers and Their Families reinforced the spending needs of workers without dependent children, and the use of additional income to pay for basic needs and bills as well as establishing savings.

States have also worked to improve upon the EITC by focusing on its value, pushing for refundability and increasing access through income and immigration status eligibility. There is much to learn from these efforts and funders are taking note of the research, communications and advocacy efforts needed to ensure that this powerful policy is robust and available to all workers and families who need it.