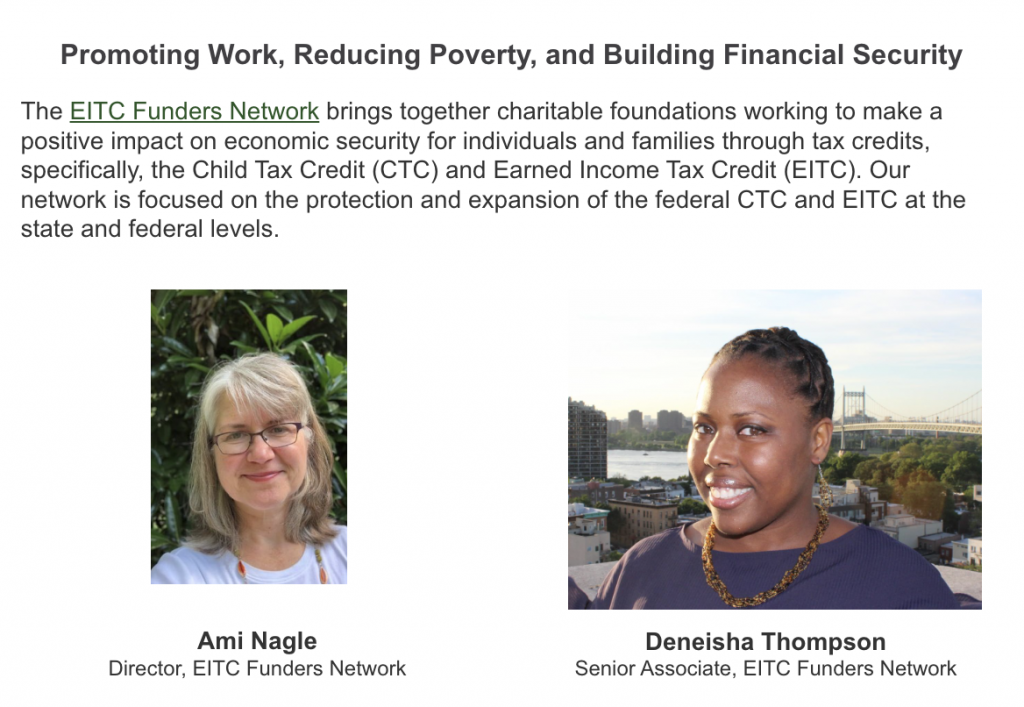 Why did the EITC FN undertake these projects?

This year, the EITC Funders Network worked with our partners on several special projects. This interview will highlight two of them. We supported a new pooled-fund called the Community Outreach & Opportunity Fund (CO-OP Fund) aimed at maximizing the number of individuals and families who got access to the expansions made possible by the American Rescue Plan Act. We also supported a social media campaign aimed at reaching young people who were newly eligible for the EITC during this past tax season.

The expansions of the federal CTC and EITC present a critical opportunity to dramatically improve financial stability for families with low income.  However, these expansions could only achieve their goals if families know about the credits, are able to enroll, and can get their taxes done in free and non-predatory settings. A key implementation challenge was that families who earn the least do not typically file income tax returns because they are not required to (sometimes called, non-filers). Therefore, the IRS has no record of them, and they would not get the CTC payments automatically via direct deposit like many middle- and higher-income families. A big push to reach an estimated 5 million non-filers and also assist them with three interrelated touchpoints: outreach and navigating enrollment, sharing stories of success and shaping the local narrative on families in need, and helping families to file or reconcile tax returns in early 2022 became the focus of the COOP Fund. The final report for the COOP Fund can be found here.

Additionally, with the passage of the American Rescue Plan Act (ARPA), the federal EITC was expanded to low-income young adults not claiming children on their taxes.  For the first time, many more young adults could get $1500 back into their pockets, but they needed to file their taxes to do so.  Understanding this was a very hard-to-reach population, the EITC Funders Network partnered with 1235 Strategies to develop and implement a social media influencer campaign to directly reach young adults through their existing networks during the final weeks of tax season.

In both the COOP and youth-focused social media projects there was an element of experimentation.  With the CO-OP project the experiment took the form of… could we stand something up in a short period of time and could the community foundation pay that critical “last mile” role?  With the 1235 project, the experiment centered around how social media influencers could be a conduit of information to help low-income, young adults get tax benefits in low-cost settings.

The passage of ARPA provided an important opportunity to reduce poverty among families.  Right away a question was raised about the role of philanthropy vis a vis large government programs.  What was the role of philanthropy of implementing public programs?  A role of the EITC Funders Network is to bring our funders together in alignment around work. When there started to be more and more of these conversations about how philanthropy could proactively help these programs be successful, we knew there was an opportunity for us to work as a bridge.

What lessons were learned?

From the COOP Project we learned:

From the youth-focused social media campaign we learned:

What are the implications for the funding community?

Lessons for the funding community include: