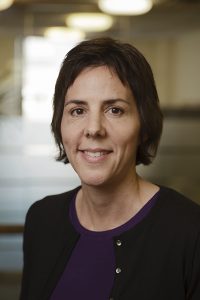 Cynthia Miller, Project Director for the Paycheck Plus Evaluation

MDRC, a nonprofit, nonpartisan education and social policy research firm, is testing and evaluating a demonstration project – Paycheck Plus – that offers workers without dependent children an enhanced Earned Income Tax Credit (EITC). The program is being implemented and evaluated in two U.S. cities – New York, New York and Atlanta, Georgia. The interim results from the evaluation of the first two years of the program in New York City were recently released. We spoke with Cynthia Miller, Project Director for the Paycheck Plus evaluation, to learn more about the interim findings, next steps, and what this project can tell us about public policy efforts.

Why is testing the idea of expanding the EITC for workers without dependent children so important and what do we hope to learn from this demonstration project?

Over the last several decades, wage inequality has increased and real wages have declined for less-skilled workers. As a result, there are many people working full-time but still unable to make ends meet. There is a body of research indicating the important labor market participation and economic stability impact of the EITC, yet most of its benefits go to workers with children. The maximum credit available to workers without dependent children, many of whom have nonresident children for whom they provide support, is just over $500. And, workers without children lose eligibility for the EITC entirely once their annual earnings reach $15,000. Important questions have been being raised about ways to tweak the EITC to improve outcomes for workers not raising children.

In this study, Paycheck Plus, we wanted to learn more about the feasibility of expanding the EITC as well as the potential effects of a more generous tax credit on income, work and other measures of well-being for working adults without dependent children.

What were the interim evaluation results and did any of these results surprise you?

Our interim findings are consistent with existing research that shows that expanding the EITC to workers without dependent children can increase income and encourage employment, without creating work disincentives. The program was designed to mirror the process by which filers apply for the federal EITC, though recipients had to actively apply for the bonus and receipt was not automatic, as it would be if this were part of the tax code. As such, the take-up rates of 64 percent in the first year and 57 percent are noteworthy. In addition, Paycheck Plus increased tax filings in both years and even increased the payment of child support in the second year.

The overall effects on employment were somewhat smaller for men than for women. While this may be surprising to some, it’s actually consistent with research on labor supply responses to incentives by gender. Existing labor market research for men shows that men don’t respond as robustly to modest increases in earnings. In addition, the smaller employment response by men could be explained by factors such as differences in information dissemination sources or existing relationships with government programs (the sample includes a fair number of men who are formerly incarcerated or fathers who owe child support – two groups known to be more likely to work in the off-the-books economy and who may be more cautious about government program participation). We will have a better opportunity to detect effects for men alone in future years when we can increase sample size by combining the New York City and Atlanta samples.

You are currently testing this project in two cities — New York City and Atlanta. How are the labor markets and policy environments in these locations relevant to the study and findings?

There are features of New York City that set it apart from other geographies. New York City has had a relatively strong recovery from the Great Recession and boasts a minimum wage that is higher than the federal. New York City and State also have their own refundable EITCs. All of these factors impact the local labor market.

We wanted to test this model in an additional city in order to have the results have broader relevance. Atlanta is a good site for replication because, similar to New York City, it has a diverse and strong economy. Atlanta’s wages, however, are more representative of rest of the country. Georgia’s minimum wage is actually lower than the federal minimum wage for certain types of workers. Also, the state does not have a state EITC. It will be interesting to see if we see a different, perhaps larger effect on income and employment from this site.

Where are you in the timeframe of the study and what comes next?

It has been more than four years since we started recruitment in New York. Between September 2013 and February 2014 we recruited about 6,000 low-income single adults without dependent children and half of this group was randomly selected to be offered a Paycheck Plus bonus for three years, beginning with the 2015 tax season. We hope to release a report next year that looks at the program’s effects after the full three years. We will also use survey data to present a more comprehensive picture of the effects on income, poverty, health, and material and subjective well-being.

In Atlanta, we are still in the first payment phase, with two more years to go. We plan on publishing an interim report in 2019 that will cover take-up in the first two years, similar to the report we published in September on the New York City interim findings. We hope that findings from Atlanta, with its different policy environment and labor market, will add to the evidence about the potential effects of expanding the EITC.

What are some key take-aways for funders interested in the EITC and asset building?

The initial findings from this demonstration project are encouraging. Most of the eligible workers received bonuses and the project increased after-transfer incomes and increased employment rates without creating a work disincentive. The results from Atlanta will give us a fuller picture, but the findings are already consistent with a large amount of additional research on the positive effects of work-based earning supplements.