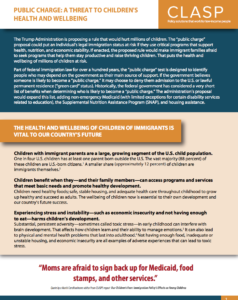 The proposed “public charge” rule was published in the Federal Register on October 10th, triggering a 60-day public comment period. Under this proposed rule, immigrants seeking admission to the U.S. or applying for lawful permanent residency could be denied if family members, including U.S. citizen children, receive public benefits for which they are eligible (see CLASP’s new fact sheet to learn more about the proposed rule and its impact on children). Tax credits, which were named in previous drafts of the rule, are no longer part of the list of benefits; however, the potential impacts of this rule remain devastating.
We urge you to take a look at our sister affinity group Grantmakers Concerned with Immigrants and Refugees’ (GCIR’s) statement on why philanthropy must take action against the public charge proposal.
________________
The following suggestions are from GCIR’s Five Ways for Funders to Take Action:
5. Urge philanthropic colleagues, civic and faith leaders, the private sector, and other stakeholders to act.
__________________
If you haven’t already, please also take a look at the EITC Funders Network’s interview with Laura Speer, Associate Director of Policy Reform and Advocacy at The Annie E. Casey Foundation, about the proposed public charge rules; why foundations should pay attention to this rulemaking process; and how funders can support immigrant families and children in a shifting policy landscape.
Tell Us What You Would Like the Network to Focus on!
Go to Top