A Spotlight on Paycheck Plus 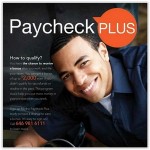 Policymakers made significant strides in “making work pay” for low-income families with children when they made permanent critical improvements to the EITC and CTC last year. But, as noted above, the EITC still largely excludes workers who are not raising children. Paycheck Plus, a pilot program simulating an expanded EITC for low-income single workers without dependent children, began as a pilot in New York City in 2013 and is now testing the effects of a more generous EITC supplement for low-income single adults in the Atlanta region. Take a look at this recent PBS NewsHour segment on expanding the EITC for childless workers: “The Bi-partison Idea That Gives a Tax Boost to Childless Workers.”